The recreational vehicle market has boomed since its financial crisis low point. More than 500,000 RVs were sold in 2017, up 17.2 percent from 2016, according to the Recreational Vehicle Industry Association. The sales included 442,000 towable trailers and 63,000 motor homes. Last year’s record level of RV shipments is expected to be eclipsed again this year.

The RV market has grown by more than 200 percent since 2009, and as sales recovered, manufacturers turned to innovative design to differentiate their products. RVs are proving popular across generations, with baby boomers, Gen-X’ers and millennials all “taking part in the RV-lifestyle,” Thor Industries CEO Bob Martin told CNBC last year.

Kevin Broom, RVIA spokesman, said that lighter and more aerodynamic towables are gaining in popularity, as they do not require large trucks or SUVs to tow. Smaller crossovers, cars and even motorcycles can tow many models. Trailers have dominated over the past decade (87 percent of sales last year). Broom noted that lighter, wind-cheating designs also waste less fuel.

Motorized RVs are also getting more efficient, he said, thanks to increased use of lightweight materials. “Traditional framing and wall materials, like steel, fiberglass and aluminum, are still in use, but we’re seeing increased-use composites and resins in RV construction. These are making RV bodies lighter but more durable.”

There are concerns that prices may rise in the RV market in the coming months as a result of the Trump administration’s metal tariffs. Thor CEO Martin said this week that the biggest RV producer is already experiencing inflationary pressures as a result of the steel and aluminum tariffs.

“Pricing is a concern as metals tariffs take effect. It has to work its way down to consumers,” Broom said, adding that it may not be immediate but occur over a matter of months.

CNBC looked at some of the newer designs available on the RV market for every budget and tailored to various transportation and travel needs.

This 89-year-old brand is known for its iconic aluminum travel trailers, but earlier this spring introduced its very first fiberglass model, the Nest. Looking a bit like a “Star Trek” shuttle, the new trailer sleeps two in a minimalist interior drenched with light from windows on all sides and overhead. Modern touches include Bluetooth-controlled LED lighting, multiple USB posts and a 3-D laminate galleytop in the small kitchen. It’s even pre-wired for solar panels for those who want to live off the grid for small stretches. At under 17-feet long and with a base weight of 3400 pounds, the Nest doesn’t need an especially large tow vehicle. 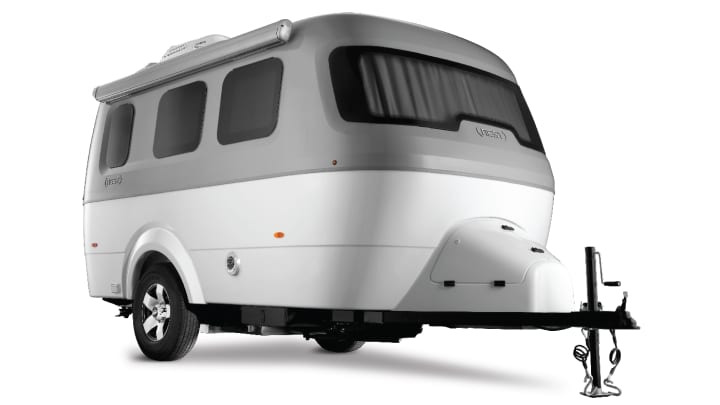 The recreational vehicle market has boomed since its fi ...